Utility of an Instrument Rating

I am training right now for my instrument rating add-on to my private pilot certificate. For years I said that there was little point to me having this rating, because in Arizona, when there is weather, you don’t want to fly in it. I decided to pursue it, finally, based on an understanding of General Aviation accident statistics: that pilots with an instrument rating are measurably and substantially safer than non-rated pilots – even while not exercising the privileges of the rating.

This was a weird morning in Arizona! I took off into VFR conditions at 5:15 am with forecasts calling for the rain in the area to rapidly dissipate. Then I flew an hour and a half of instrument approaches at Casa Grande airport with no one around, and in perfect weather conditions. Eerily quiet. When it’s time to head back to Phoenix we encounter a solid line of low clouds and light/moderate rain running across the entire southern valley. There was no way through while seeing outside, so it’s no wonder we were alone down there. 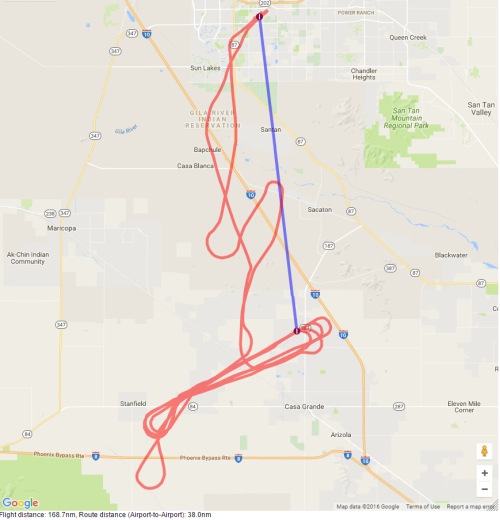 This is exactly the situation where, as a VFR pilot, I’d turn back, land in Casa Grande, and wait out the weather over breakfast. However, armed with an instrument instructor in the right seat, we obtained the first “pop-up” IFR clearance of both our lives and, hand-in-hand with ATC, I flew a beautiful approach back into Chandler.

The rain even cleaned off the plane. Win. Total win.

Earlier this week, I flew my first IFR cross-country to Tucson International airport. This was not my mandatory “long” cross-country with at least one segment longer than 250 nautical miles - it was just a practice step. It was, however, my first time talking IFR-speak to actual air traffic controllers.

I filed the flight plan down to Tucson, picked up my clearance at Chandler Airport, and departed IFR at 6:40 am (I was delayed while finding a quart of oil in another hanger). The weather this Tuesday morning was beautiful in Phoenix, with areas south having widespread showers and the potential for thunderstorms as the day heated up. The trip down was uneventful, but when our plane was handed over to Tucson Approach we couldn’t locate the airport through the rain and haze.

I’m not sure the airline pilots could actually see the runway, but they were claiming to have it in sight from the same altitude as us, just a few miles to our left. (Approach was probably wondering who was telling the truth.)

“Skylane 5LS, we’ll keep you on this heading for a minute to see if it comes in sight, if not I’ll sequence you into the ILS.”

Sure enough, we caught sight of the airport just a minute later and landed on runway 11R. Ground had us park at the base of the tower to pick up our IFR clearance back to Chandler and take stock of the weather situation.

This part of the flight’s communications were even recorded by LiveATC.net, so you can listen in on my tentative-but-functional radio work:

Overall, conditions were bad south of Tucson but mostly clear north, and entirely clear back in Phoenix. There was a lot of big gaps in the radar north, so it looked good to head home. Our clearance was simple (0:53 in audio): Vectors to the V105 airway, then on to Phoenix at 8,000 feet.

In the air back there were actual thunderstorms brewing west of Marana, AZ, prompting us to divert a bit (4:07 in audio) - which actually shortened the trip quite nicely. The audio recording ends at that point, but conditions were clear and nearly 36° C back in Chandler, nothing like the 28° C temperatures we’d left 30 minutes behind.

What a fascinating time

Phoenix, Arizona is not known for having weather other than the words “hot” and “dust storm,” but our monsoon season is the exception. 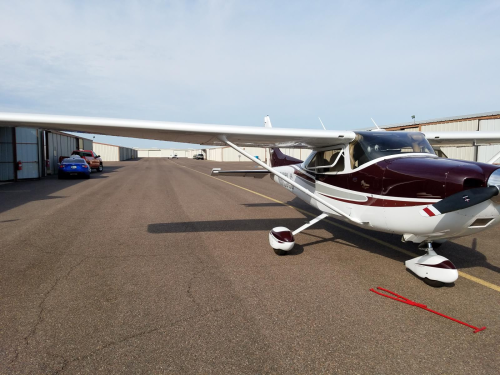 I’m training for my instrument rating right now, when it’s both hot and humid, because this time of year I don’t have much for travel commitments. I wasn’t anticipating that my training would involve flying in actual weather, but here I am doing exactly that.

There’s not much weather in Arizona that is safe to fly through; certainly our afternoon monsoon storms are real dangerous things. But early in the morning, in the right season, it turns out there can be some utility to the instrument rating even here.