During the months I worked in Let’s Encrypt’s operations team I got fairly used to being the go-to man for any question that a database query could solve. I also threw together the code for the Let’s Encrypt Stats page. All said, I’d gotten quite attached to being able to query the Let’s Encrypt data set. Now, however, I don’t have any access to the datacenters, or the databases within. But I do have access to Certificate Transparency logs, as well as other data sources like Censys.io.

I’ve been coding up a Golang tool called ct-sql that imports CT and Censys.io certificate exports into a MariaDB Database to help me perform population statistics on the state of TLS on the public Internet.

With this tool I imported the Google Pilot, Certly.io, and Izenpe.com certificate transparency logs into a local MariaDB database:

I’ve been really interested in one question since we started opening up the private beta at IETF94 last November:

Is Let’s Encrypt prompting people to secure domains which had not been secure before, or are people changing from their existing CA?

Since I was first introduced to the Let’s Encrypt concept in 2014, I had a feeling free and automated certificates would primarily be added to new sites, and for the most part existing properties would stay with their status quo.

@vtlynch @jamespugjones @Cryptoki @letsencrypt yes crawler gets a lot, but not all, censys and log overlap isn't as big as assumed

@jamespugjones @Cryptoki @letsencrypt best you can do today would be union of censys and ct.

At his recommendation, I patched ct-sql to understand the Censys.io certificate JSON export format, and then expanded my data set by importing the 92.4GB export from 2016-02-16 (free account required). This took about a day, given the speed of iSCSI on my LAN.

I set up a couple of useful SQL views to simplify queries and then got started. First, I wanted to find out how big the overlap actually is between Censys.io and CT.

Certificates in Censys vs CT vs Both

The output is here: CertsInCTversusCensys.tsv.

With the data, summed over those months, it turns out while Censys.io has a larger data set, 82% of their crawled certificates have already been imported into at least one of those CT logs. 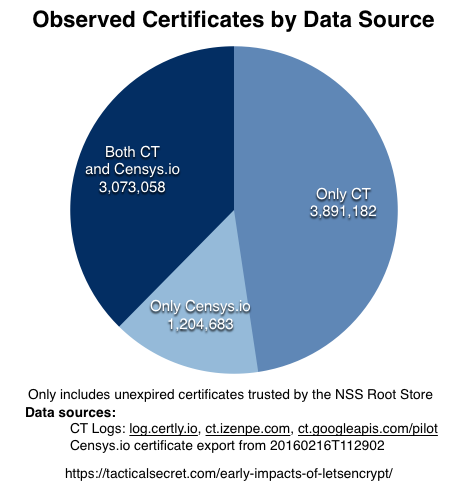 This is useful to anyone doing analysis on CT, whether it’s via tools like mine, or via Rob Stradling’s fabuluous crt.sh. Generally speaking, most certs are in CT, and it won’t be very difficult to back-fill the million certs which aren’t yet. (Maybe next week…)

So that leads to an opportunity to use this additional data to re-examine the first question: is Let’s Encrypt being used to secure new domains, or as a cost-saving replacement CA for existing domains?

Domain Names Secured By Other CAs

The output is here: NamesIssuedElsewhere.tsv.

This query takes about 4 hours on my home server: The name table has over 97 million rows, and the certificate table another almost 14 million rows. This is the same query I ran to produce the tweeted graph, but here’s the new one including one more CT Log (Izenpe) and the Censys.io export: 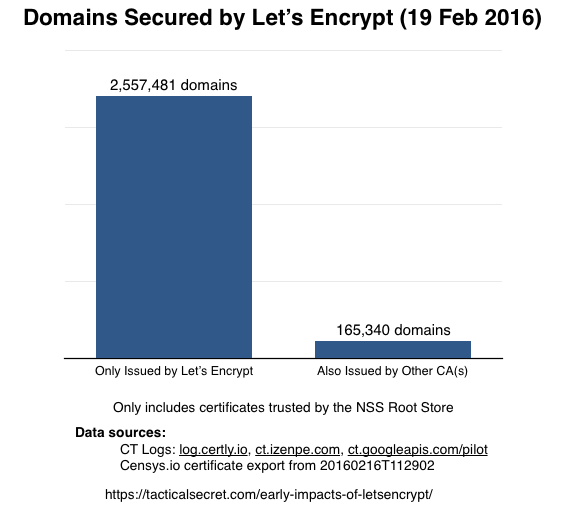 As Ryan expected, with a larger dataset of certificates, we did find some more instances of sites changing from another CA to Let’s Encrypt. Overall, the percent of sites which have only had a publicly-trusted certificate issued by Let’s Encrypt went from 94.3% down to 93.9%.

There are still some caveats:

All said, I believe Ryan Hurst is correct that this is about the most complete data set we can readily obtain. In the first quarter of its’ operation then, Let’s Encrypt has far and away been used more to secure previously-unsecured (or at least untrusted) websites than simply as a cost-savings measure.

Most Observed Unexpired Certificates by Issuer

One last question I often get asked is:

How large is Let’s Encrypt compared to other Certificate Authorities?

How you ask this question is important. Most Certificate Authorities issue a lot of TLS certificates for corporations’ internal use, not to mention email and code-signing certificates. Also, there have been two decades of SSL/TLS, so we’ll need to limit this to unexpired certificates.

If we stick with just unexpired certificates observed on the Web (via Certificate Transparency and Censys.io), we can figure that out pretty readily:

The output is here: UnexpiredCertsByIssuer.tsv.

This is a relatively fast query, as my database contains only 2,383 unique issuing certificates. 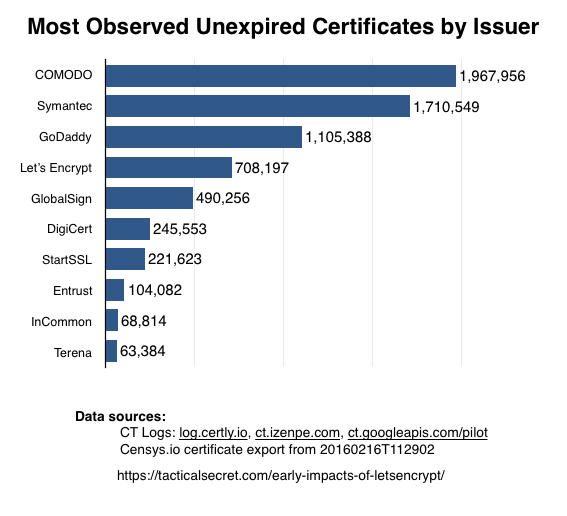 I took a best effort at grouping all the various intermediate issuers to match with the actual organization that operates the Certificate Authority. You can see the grouping I used here: UnexpiredCertsGroupedByCA.tsv. I apologize in advance if I made mistakes; I’m going to be adding that information on a per-issuer basis into my tables to make this a little easier, and will (of course) publish the list.

As I write this, I’m importing WoSign, Symmantec, DigiCert, Venafi, and Google’s other logs into the database. There’s always more ways to pull out data.

If you have some questions you think my database can answer, feel free to suggest them to me via Twitter.