Last night I received this political cartoon in my email: 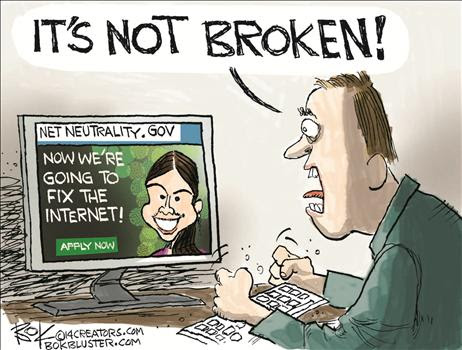 This political cartoon is built upon false pretense. The Internet is currently neutral, and Comcast, AT&T, Verizon and others want to change the status quo away from net neutrality.

I agree with the cartoon that the Internet is not broken, but these companies want to utilize their monopoly position to control what websites you visit, what you see on those websites, and make it harder or less appealing for you to utilize Internet services that are competitive to their portfolios. How can I say that? Because they keep getting caught doing it.

You shouldn’t oppose net neutrality just because the President is in favor of it. In this circumstance, he’s speaking on behalf of so much of the technology industry that’s making this country so much wealth. 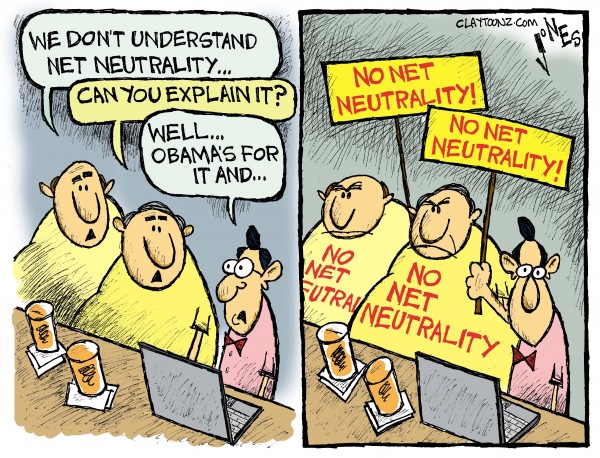 (You all know I’m the skinny geek in this cartoon)

There is a game afoot where these large media and telecom companies see a chance for them to control the Internet, like America On-Line and Microsoft once tried, but to do it through the blessing of the courts. (Remember that these same companies that desperately want to control your Internet usage are the ones who control the media messages about the subject.)

For tomorrow’s industry-disrupting technology startup to be successful, the Internet needs to stay as it is today[1]; net neutrality must be maintained.

([1]: Actually, Comcast was trying to make people use Xfinity Streampix instead of Netflix by making Netflix look terrible earlier this year, and you can expect more of that if the Internet stops being neutral)

It’s hard enough in the world of small business today. The telecom companies don’t need a government handout like letting them pillage small business. Just think, if it were legal for Cox and Comcast to stop Netflix streaming from working five years ago, don’t you think they would have?

When was the last time Cox wowed you with their technological innovation? Never? Then why would you give them free license to change the Internet?

When Cox legally adds their own advertisements to YouTube, or what you’re reading and seeing on the Internet, can you realistically change providers from Cox? If you live in the Florida Panhandle, you have your choice of Cox at high speed, or CenturyLink at low speed. So no, you can’t. Cox has a monopoly position in your town. It’s the same across most of the United States. Comcast says it’s too expensive to compete against other cable companies, so they don’t. (That’s part of their argument for why it’s OK for them to acquire Time Warner Cable, that it’s too expensive to compete.) There are Internet companies in the world attempting to edit “secure” websites like eTrade and here’s a graph of the incidence rate for Firefox users. It’s already happening.

That’s what this is about.

The Internet has been a great opportunity for me, let it remain neutral so it can stay that way.