This is a quick status update from the Early Impacts of Let’s Encrypt post.

With that out of the way, the main criticisms against the first round of statistics I published were:

I’ve remedied these things now; the ct-sql tool stores the “registered domain” metadata in its own table, and I’ve acquired larger and more powerful computing capacity so that I can operate on the larger datasets.

Certificates in Censys vs CT vs Both (Updated 14 April) 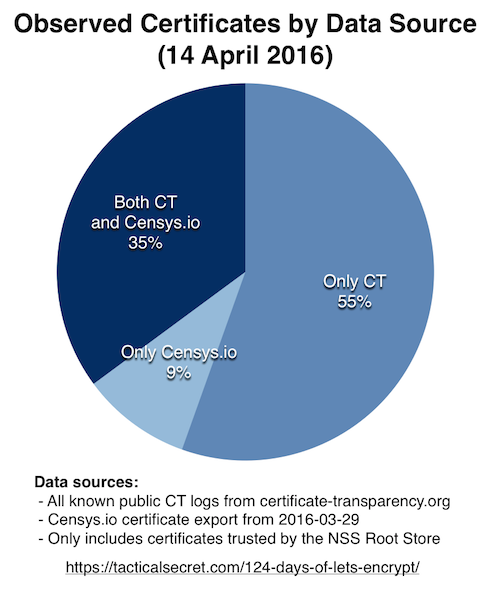 Update 14 April 2016: The query should have been updated when I increased the number of logs; I apologize. The original query, from Early Impacts of Let’s Encrypt caused duplicate entries to be counted, showing >28M certificates when in fact, the whole database of CT+Censys contains only 17.7M certificates.

The updates show that only 9% of observed, currently-valid certificates are in Censys.io but not inserted into CT.

The updated query is below:

The output is here: CertsInCTversusCensys.tsv

Sites Secured By Other CAs 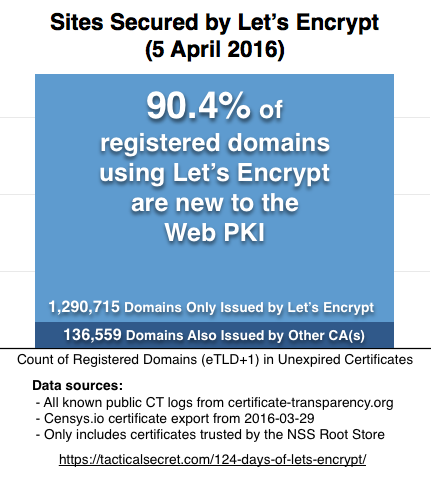 I’ve modified this query a bit, both to use the new registereddomain table of eTLD+1 entries, and to use a temporary table to speed up uniqueness calculations.

The output is here: LERegDomainsIssuedElsewhere.tsv

In brief, here’s what changed in the tooling since the last post:

The ct-sql tool can now take a URL to a Censys.io JSON export, download and import it without having to first write it to disk; helpful when you don’t have 100+ GB of scratch space to work with.

The mechanism behind the ct-sql tool handles already-imported certificates cleanly, so I’ve actually imported several copies of the Censys.io certificate dataset at this point. For the purposes of this exercise though, I’m working from the dataset exported from Censys.io on 2016-03-29.

I’ve imported all the logs, and have a Systemd timer keep them up to date. The log list is available in JSON format at https://www.certificate-transparency.org/known-logs/log_list.json, so a bit of kludgy scripting means the logs in use for my statistics now are:

Most certificate authorities use many PKI roots to conduct their business. The ct-sql tool only knows about particular roots, not companies, so I made a rough mapping of roots-to-companies. It’s very rough, and uses name matching rather than something more stable like authority Key IDs.

Anyway, it’s a thing. You can see it here: IssuerToCompanyMap.sql

The result lets you roughly connect issuers to companies with a SELECT FROM unexpired_certificate NATURAL JOIN issuercompany GROUP BY companyid kind of approach.

There’s rates and ETAs now on operations, so you can have an idea of how long your network will be saturated on an import. Or see that you’re getting rate limited heavily by a particular CT log.

If you want to keep full DER-encoded certificates around, the tool can now write them in a folder structure on disk for you, 1024 certs per subfolder. They’re indexed by the internal Cert ID from the database.

I’ve put them on disk this way, separate from the relational DB, as a cheap way to avoid worrying about maintaining indices and accidental caching. Also, this stuff gets big quickly, so it’s nice to be able to use separate S3 volumes for these… or just delete the oldest ones using find.

I’m planning to spend some time this month reworking Let’s Encrypt’s stats page. Most of that work will be producing a stats-producing utility in Boulder itself, which the Let’s Encrypt ops folks can run a few times a day, uploading the results to an outside datacenter. Once that’s in place, I’ll be working on a rewrite of the stats page itself, slicing the data in more interesting ways than it currently is.

Ideas for what to produce are all welcome; feel free to ping me on Twitter.